The unifying hazard of modern parenting. It drives parents to distraction. It’s causing the downfall of civilization — destroying reading, polite discourse, innocence, trust and truth. Technology. Devices. Social media. Phones. Video games. Internet. Screens. The fact that we don’t have one name for it and that it has so many facets, positive and negative, is telling. And we didn’t have it when we were kids.

This has been the year of the screen. Many of us have been staring at them all day, trying to unmute, be productive, pretending that virtual school, work or social life approximates in any way to real life. And when we weren’t doing that, we were obsessively staring at our phones, trying to find distraction.

With spring in the air, we decided to revisit some of the good advice from the parenting sessions on technology we’ve held in the past. We looked for an expert we’d consulted and found one on the couch in Katherine’s home, looking at his phone.

He had lots to say, the first thing being is that, at 17, he is no longer an expert. Sure, he knows about how teens use social media and the internet, but he is distant from middle school phone culture. And that’s part of his advice. Parents also know very little. Even if you’re phone savvy, you don’t fully understand kids’ apps, games and culture. So the first task is to try to stay informed, knowing that what you think you know will be out of date immediately.

We asked what he would do if he was a parent of a 10-year-old, steering them through this overwhelmingly absorbing world?

He said that you may well want your kids not to be left out of something — that’s undeniably part of life and which their friends have — but it’s best to take it slow.

Firstly, model good habits and put your phone down.

Next, don’t use the (small) screen as a babysitter. If you need a break, a time-limited TV show is a better option than a video game. And begin training early, because as children get a sense of the literally endless possibilities of YouTube, TikTok and Minecraft, it gets harder for them to stop and for you to establish limits — short of constantly taking the device away, which should always be your prerogative but which generates conflict. Other limits you might consider in your family: no phones during meals, no phones in bedrooms, in the car…

Find out what they are seeing and doing online. Take TikTok. It looks harmless, right? Yes, TikTok is fun, but like anywhere on the internet, it is “untamed.” Children who scroll for hours will learn about things they aren’t old enough to learn about and see things they aren’t old enough to see. And they will waste hours of time as its algorithm is learning their tastes and feeding them an infinite amount of what they want.

It’s also easy to record and upload content. Kids see a trending dance, record their own version and post it. So of course, make accounts private and restrict them only to real people they follow and who follow them, but know that keeping track will be impossible as your kids get older and enter the realm of social media.

The expert’s view? Delay social media until children are older and more responsible. Establish clear rules about safety: not disclosing information online or talking to strangers and understanding appropriateness in what they post.

You may know your kids’ passwords, but don’t imagine you’ll be forensically checking their accounts every night once they’re teenagers. By then, the genie is out of the bottle.

His most important expert tip? Openness and dialogue. Talk to children about what they’re seeing and doing. Be interested in technology and resist the urge to take it away (too often), as you know how desirable that will make it. Understand that using technology is part of a young person’s interactions, expression and identity.

Finally, give them appropriate space to engage with technology. “Part of parenting is letting go,” the expert says sagaciously, which makes us think he may actually be ready to get off the couch and get out into the world on his own.

Growing Community, by Shirley Ritter, the director of Kids First, and Katherine Sand, the director of Aspen Family Connections, runs every other Wednesday in the Aspen Daily News. It features topics of interest related to early childhood, parenting and education. To reach the authors, email Shirley at shirley.ritter@cityofaspen.com or Katherine at ksand@aspenk12.net.

If you enjoyed this content, please explore other similar articles as seen below: 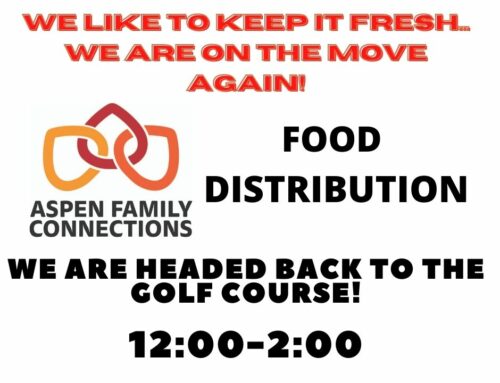 AFC Food Distribution is back at the Aspen Golf Course

Growing Community: Are we there yet?

AFC Food Distribution switches to every other week for the fall!